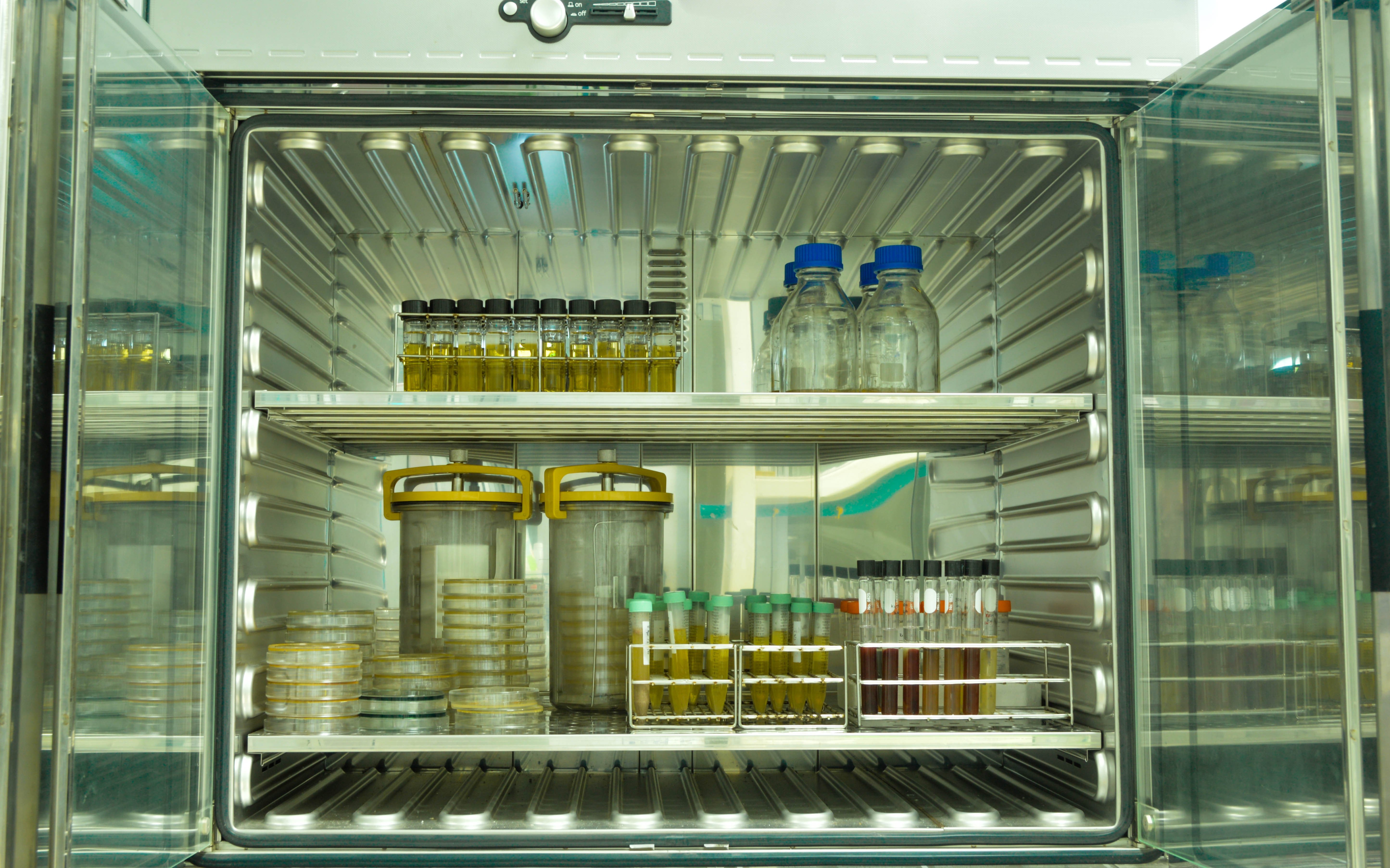 What Is Meant By The Word Anaerobe?

In short “anaerobe” means: To live without oxygen. Hence anaerobic organisms are organisms that do not require molecular oxygen (O2) to live and propagate. In contrast, aerobic organisms are dependent on the availability of O2 because they use it as a terminal electron acceptor in aerobic respiration. Thus, molecular oxygen - or dioxygen, how the most common state of the oxygen homodimer (O2) is called, serves as a critical component in energy synthesis.

When it comes to the relation towards oxygen, organisms can be divided into three main groups:

In addition, microaerobic organisms are organisms that need molecular oxygen to preserve energy (making them obligate aerobes), but they cannot tolerate the partial pressure of oxygen of the atmosphere. These organisms require lower oxygen partial pressures to survive. 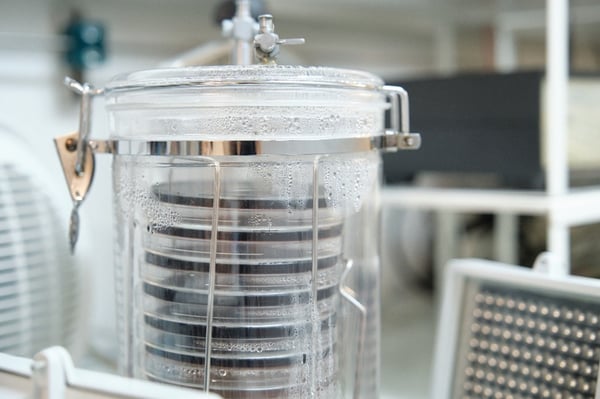 Determining The Oxygen Preferences Of Microorganisms

The preference of oxygen availability of organisms can be observed in a simple experiment. For this, test tubes are filled with thioglycolate broth (a medium characterized by the complete absence of molecular oxygen) and only lightly closed by e.g., cotton. This allows for the diffusion of O2 to the test tubes and upper part of the medium, creating an oxygen gradient with more oxygen at the top of the tube and less at lower positions. 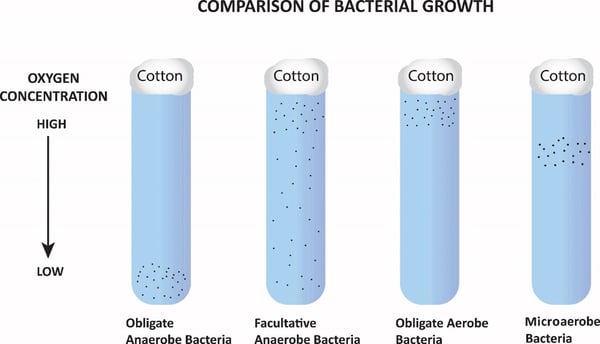 When inoculated with cells, obligate aerobe cells would naturally assemble at the top, trying to access as much O2 as possible. Obligate anaerobes would do the opposite: To avoid contact with O2 these cells would gather at the lower half of the tube. Facultative anaerobes would basically use the full space as both states are acceptable for these cells. However, since an aerobic respiration is energetically beneficial for cells that can use both metabolic pathways, growth at higher locations might be faster and cell density might be slightly higher there as well. The typical distribution of microaerobic organisms would be in the upper half of the test tube, where oxygen is still present, but not at the outmost surface – avoiding higher concentrations of the gas.

In all forms of life adenosine triphosphate (ATP) is used to store energy and is therefore also referred to as the molecular unit of currency for energy. It is readily available to be converted to adenosine diphosphate (ADP) or adenosine monophosphate (AMP) releasing energy for countless energy-dependent processes, such as muscle contraction or nerve impulse propagation.

Depending on the organism, different pathways exist to produce ATP. Looking at the entity of energy production, oxygen is the most important electron acceptor allowing for the energetically favorable aerobic respiration which yields the most ATP molecules per substrate. This aerobic respiration describes the oxidation of organic substrates with the help of oxygen as the terminal electron acceptor.

Anaerobic organisms on the other hand often use anaerobic respiration to produce ATP. This metabolic pathway follows the same principle as aerobic respiration but excludes molecular oxygen as constituent. Hence, it uses different alternatives as terminal electron acceptors, such as, for example, nitrate, fumarate, or other oxidized compounds. The series of redox reactions creates an electron gradient over a membrane and this electron potential is then used by an enzyme, the ATP-synthase, to produce ATP molecules.

Besides anaerobic respiration, there is another way how organisms can produce ATP in the absence of molecular oxygen, which is called anaerobic fermentation or digestion. In this pathway, ATP is generated without the involvement of a respiratory chain but with a substrate chain phosphorylation. For this process, the substrate is phosphorylated to an intermediate and this bound phosphate is later transferred to ADP (yielding ATP), resulting in the respective fermentation product. Several famous and industrially relevant products are the result of fermentations, such as ethanol (wine and beer), lactic acid, acetic acid, and many more. These products often define the titles of the respective fermentation process, such as alcohol fermentation, lactic acid fermentation, etc. 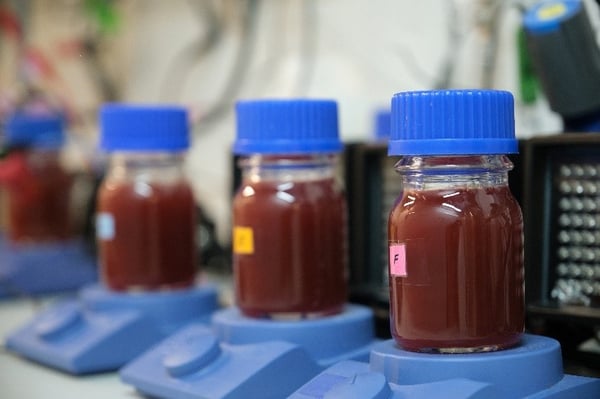 In terms of energy synthesis, fermentation is not efficient since it results in lower ATP yields in comparison to respiration. Therefore, facultative anaerobic organisms usually only carry out fermentation when no oxygen (or alternative electron acceptor) is available. However, some yeasts have shown to also go down that path and produce ethanol via fermentation when oxygen is still present. Presumably, this provides a benefit due to the production of ethanol, which is toxic for most other organisms and prohibits the growth of putative competitors.

In aerobic cultivations the supply of oxygen is crucial and often one of the critical steps in optimizing bioprocesses. The diffusion of oxygen from air to the liquid medium is rather slow whereas oxygen consumption of organisms can be fast which can lead to (locally confined) anaerobiosis. This is then contained by accelerating the introduction of oxygen via increasing surface areas or aeration.

For anaerobic cultivations, the challenge is to remove oxygen completely from the medium, maintaining anoxic conditions. This is especially important to allow the growth of obligate anaerobic organisms such as Clostridium or Chlorobium species for which even small concentrations of oxygen are harmful. 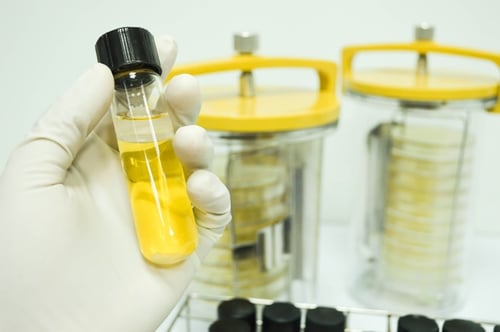 Culture media are boiled and deaerated and kept in tightly closed bottles. The addition of reducing agents (ascorbic acid, thioglycolate, sulfides, or others) remove possible traces of oxygen. Anaerobic pots can help to keep an oxygen-free atmosphere. For smaller volumes, gas tight hungate tubes with screw caps and butyl rubber septa are favorable. The butyl rubber reliably stops the entry of air and can be punctured with a needle, allowing the introduction of liquids, free from air. The same principle is used in serum bottles which are used for anaerobic flask cultivations.

In certain processes, it is not just important to ensure that no oxygen enters the culture but also that gases produced as byproducts can escape the vessel. Beer production with yeast is one example in which carbon dioxide (CO2) is produced and needs to be removed. A so-called fermentation tube, filled with water, can be used to seal the fermentation vessel, ensuring an airtight closure but at the same time CO2 can escape through the water. The CO2 generation is thereby even visible by occasional bubbles in the little water reservoir.

The inoculation of extremely oxygen-sensitive organisms can be carried out in specialized anaerobic benches (glove boxes), in which an artificial, oxygen-free atmosphere is created by filling it with a nitrogen/hydrogen gas mix or argon. Mostly, organisms can be inoculated in normal air atmosphere when a nitrogen flow is used, ensuring that the media does not have contact with the surrounding air (a procedure named hungate technique). To monitor if the medium is and stays oxygen-free, colorimetric indicators are available. For example, resazurin turns blue when oxygen is present and red after it was oxidized (without oxygen contact it is colorless). 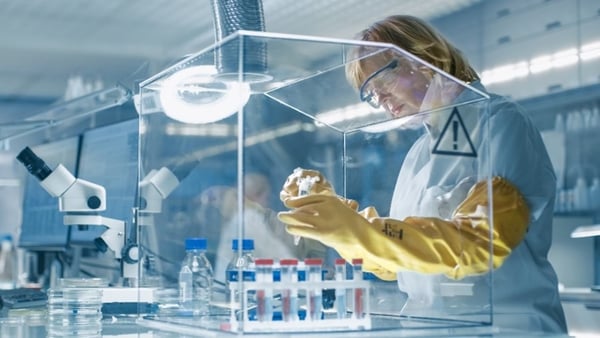 Taking samples of anaerobic cultures is not ideal because it likely exposes the culture to oxygen. It is therefore preferable to use non-invasive methods to monitor biomass. The Cell Growth Quantifier (CGQ) is a sensor for non-invasive, online biomass monitoring via backscattered light measurements which can be easily applied to anaerobic cultures.

The cultivation vessels used in anaerobic cultures usually differ from those employed for aerobic ones, since they do not need to be optimized for oxygen supply. When e.g., Schott bottles or serum bottles are used, bottle adapters (of different sizes) allow for a sensor adaptation to the side of the flask and a lateral measurement.