There is a lot of variability in the large world of microorganisms. Cell shape is no exception. While many unicellular bacteria are spherical-, rod- or spiral-shaped, filamentous forms exist as well. Within the fungus kingdom, the filamentous shape is common and represented for example by the classical mushrooms or molds, that you can find on forest floors or on rotten food. And even though, the typical yeast cell morphology can be described as round or oval-shaped, some dimorphic yeast species can transition between the common form and filamentous-formed growth as part of their life cycle.

But how is this filamentous shape created?

The rounder-shaped cells of bacteria or yeast species mostly propagate via cell division. Filamentous organisms, however, extend their cell size to an elongated form, long relative to its width, instead of dividing into multiple cells. Hence, the cell length of filamentous organisms is generally 10-50 times larger compared to bacillary cells. The resulting, often branched, structure is known as hyphae. In some organisms, an individual hypha is divided into different compartments via cross walls that are called septa. 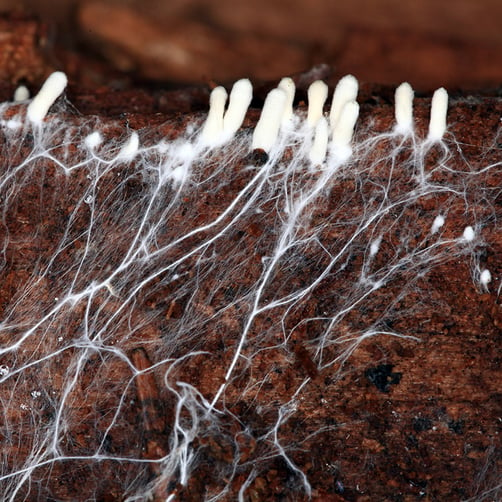 The entity of all hyphae, produced by one species, is described by the term mycelium. The mycelium of forest mushrooms is located underneath the forest soil, mostly invisible except for the occasional fruiting sprout. Regretfully, you have probably seen the mycelium on rotten food before.

In biotech applications, mycelia of relevant filamentous species are grown in submerged liquid cultures, in which they can take on different morphologies:

The pellet morphology is defined and distinguished from clumps by the presence of a dense core of packed cells which is surrounded by a “hairy” region of radially growing hyphae. Clumps generally lack such a core. In some cultivations, you might find a continuous behavior between the different forms and the various morphologies considerably influence the character of fermentations. 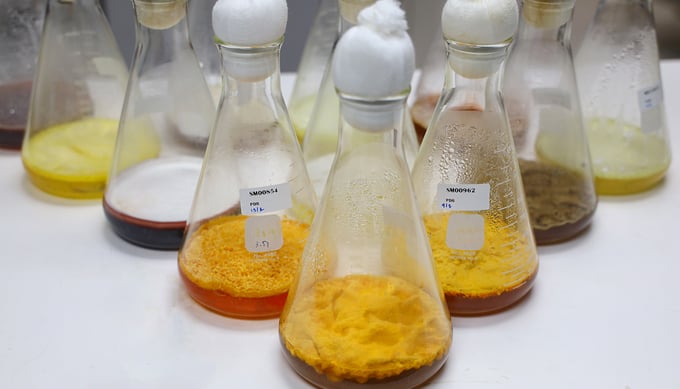 Cell shape is usually something very specific to bacteria species and, among other factors, is even used for their characterization. Regardless, certain bacteria can change their normal morphology and undergo filamentation, depending on the environmental conditions. This conditional filamentation can be triggered by several factors, including:

Initiated by one or more of these stresses, the conditional filamentous bacteria suspend their cell division, while continuing lateral growth of the cells. This lowers the risk of cell rupture during cell division and avoids the generation of non-viable cells when conditions are rough.

Once more friendly conditions are restored, a fast increase in cell numbers is easily achieved by rapid cell division. This is possible because many hyphae contain multiple nuclei, so the elongated cells can quickly be divided into multiple cells with a single nucleus, without increasing biomass.

Thereby, conditional filamentation improves the probability of survival during periods of stress while facilitating the regeneration of cell populations when conditions have eased. Thus, it is especially valuable under adverse conditions and conditional filamentous bacteria can often be found in environments that are exposed to changes, such as soil or fresh-water habitats.

1.) It improves the capacity of the organism to colonize surfaces, allowing better access to several nutrients and for adaptation to diverse environments. When in a soil habitat, this colonization further stabilizes the soil aggregate, which in turn benefits several other organisms that live in the same environment.

2.) Filamentous cells, due to their elongated size, are less susceptible to ingestion by other organisms.

3.) When exposed to antimicrobial agents that target the cell wall synthesis (like β-lactam antibiotics for bacteria), filamentation offers an exit because it avoids the synthesis of new cell walls. Accordingly, many antibiotic or antifungal resistant species have been found to be filamentous.

If the filamentous form has so many benefits, why don’t all organisms use it, you might ask?

Between all the mentioned benefits there are also some significant fitness drawbacks that cells have to bear;

2.) Some cells that are created from filaments after being exposed to high stress are not viable because they lack a nucleus. 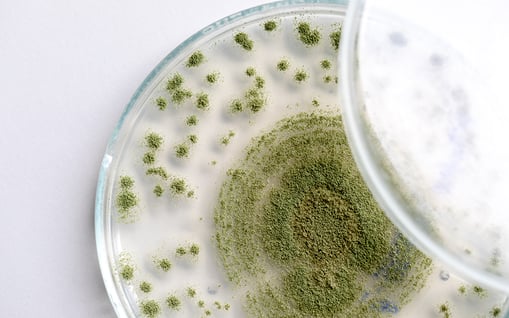 More and more relevant products are produced with the help of filamentous fungi. They are considered efficient cell factories because of their capability of post-translational modifications, in which they fine-tune proteins e.g., by the addition of carbohydrate groups. Their habit of secreting proteins into the medium, makes downstream processing easier. The hyphal tip of filamentous fungi is usually the site where most of the proteins are secreted, which makes highly branched hyphae advantageous for higher protein yields.

The morphological appearance of cells is also tightly intertwined with process conditions and the productivity of fermentations. Certain challenges are encountered when working with filamentous organisms. For example, the fragmentation of mycelia by impeller contact or other shear forces. Furthermore, since most fermentations of filamentous organisms entail a heterogeneous culture broth with cell pellets or aggregates, nutrient gradients and oxygen limitations in certain parts of the broth might occur which is disadvantageous for (aerobic) cells. 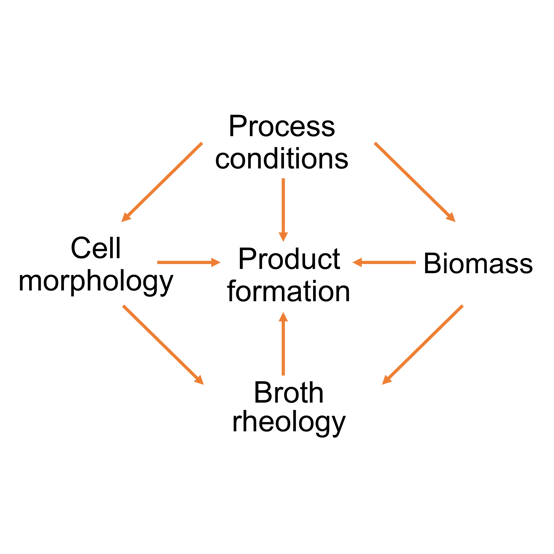 Biomass monitoring for submerged cultures of filamentous organisms is especially challenging. Classical optical density measurements (OD600) are not feasible for non-homogenous cultures. Image analysis is one technique frequently used to characterize the size and shape of filamentous organisms quantitatively. Parameters like hyphal length and branching frequency can be defined by this method. More commonly applied is the determination of cell dry weight at defined time points. However, this procedure involves time-consuming hands-on work and disrupts the bioprocess due to its invasive nature. To determine growth phase details non-invasively and get the most detailed information on growth behavior, highly automated backscattered light detection is an attractive alternative.